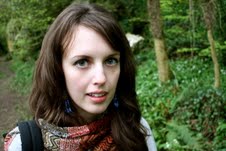 Over the course of the next few days and weeks, I’ll be posting interviews with those writers reading as part of the Poetry Ireland Introductions series 2013. One of this week’s featured writers is American poet Madeleine Barnes, who reads on Thursday 30th May.

Philip Cummins: What is your earliest memory of poetry at home or in school?

Madeleine Barnes: My mother Michelle Maher is a poet and she is my earliest and most influential memory of poetry.  I also have a memory of a day in fifth grade when my teacher asked the class to write a poem about something we were thankful for.  I wrote and illustrated a poem about a turkey and he read it aloud to the class.  I thought this was very exciting.

PC: Is there a particular poet, poem or book of poems that was, for you, like discovering rock n’roll for the very first time? Can you describe what it was like?

MB: When I read Rainer Maria Rilke’s poetry, I felt ecstatic, shaken, mesmerized by the musicality of his language and moved by the obsessive spirituality of his poems, especially those in the Book of Hours.  The lines from “Encounter in the Chestnut Avenue” had a powerful effect on me: “But suddenly the shade was deep, / and nearby eyes lay gazing // from a clear new unselfconscious face, / which, as in a portrait, lived intensely / in the instant things split off again: / first there forever, and then not at all.”  The sounds of these lines surprised me, and within them I found a perfect description of the transitory nature of living, which I had never been able to describe before—I was fourteen—and the last line, “first there forever, and then not at all” spoke to the way I experienced the wonder of living: in brief, irrecoverable instances.

PC: Which poets do you think best characterize the qualities that are found in your own poetry?

MB: I think Louise Glück’s poetry contains similar obsessions with the breakdown of the body, the fluidity of memory, and the constant search for sharp, precise language.  Anne Carson’s poetry in Decreation (2005) shares my poetry’s tendency to question and undo the notion of identity, and Matthea Harvey’s poems in Pity the Bathtub Its Forced Embrace of the Human Form have influenced the shape and form of my poems for years.  My poems strive for the musicality and linguistic energy achieved in poems by Terrance Hayes and Louis MacNeice, and the narrative passion of Jim Daniels.  I will be working my whole life to create work of that caliber.

PC: What was your first “Eureka!” moment in writing and publishing poetry; the moment when you realized “Hey, I’m actually on to something here!” in terms of your work coming together and first getting accepted and published in magazines and journals?

MB: In high school I entered a poem called “Afterlife” into the Leonard L. Milberg ’53 Secondary School Poetry Prize competition judged by the faculty of the Princeton University Creative Writing Faculty, and it won.  I was so excited that I nearly went crazy because I thought that maybe, maybe I could also write poetry and make language my life in the way that poets I loved were able to.  This occurred at a pivotal time, right before I graduated high school, and I got to fly to Princeton where I met Paul Muldoon and C.K. Williams, who helped me decide to pursue poetry in college.

PC: Finally, if you could own and keep just three collections of poetry on your bookshelf- excluding, of course, your own- which collections would they be and why??

MB: I would keep Adrienne Rich’s Diving Into the Wreck for its bravery and haunted energy, Elizabeth Bishop’s Geography III for is perfection and resonance, and James Wright’s The Branch Will Not Break, because it contains a poem called “The Blessing” whose final lines continually change my life: “Suddenly I realize / that if I stepped out of my body I would break / into blossom.”

Madeleine Barnes reads as part of the first in a series of three readings as part of the Poetry Ireland Introductions readings series on Thursday 30th May at 6.30pm at the Irish Writers’ Centre, 19 Parnell Square, D1.

Also reading with Madeleine are: