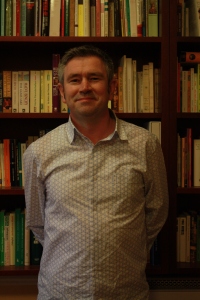 What is your earliest memory of poetry at home or in school?

At school, I enjoyed Kavanagh and Yeats, but I also found myself drawn to George Herbert, John Donne and Hopkins. My parents would have known Kavanagh in passing as my father was station master in Inniskeen in the late fifties, but my mother did not approve of him as a person, although she found it difficult to reconcile him as he was with the beauty of some of his verse.

Is there a particular poet, poem or book of poems that was, for you, like discovering rock ‘n’ roll for the very first time? Can you describe what it was like?

It’s hard to remember if it was John Cooper Clarke’s Chicken Town or Ginsberg’s Howl. I think I preferred the “other poems” more than Howl itself, poems like America and A Supermarket in California. When you’re young you’re attracted by the big statement and the swear words, and I suppose that’s only normal.

What was your first “Eureka!” moment in writing and publishing poetry; the moment when you realized “Hey, I’m actually on to something here!” in terms of your work coming together and first getting accepted and published in magazines and journals?

It has to be when Dermot Bolger published my first poem in an anthology in 2008. A lot of new writers owe a debt of gratitude to Dermot.

What is the most memorable poetry reading that you have attended and why?

Very hard to say, but the reading at Over The Edge in Galway earlier this summer was pretty awesome: Anne Tannam, Alan McMonagle, Eamonn Wall, Carlos Reyes and Louis de Paor.

Finally, if you could own and keep just three collections of poetry on your bookshelf- excluding, of course, your own- which collections would they be and why?

It’s hard to limit it to three, but I’d have to say there has to be a Yeats, maybe The Tower. This collection has grown on me over the years where once I preferred the more direct poetry of Responsibilities.  And probably one of the Don Paterson collections, Rain I think. And then maybe some Blake, or Ted Hughes’ Birthday Letters, or Elizabeth Bishop’s Complete Poems or Robert Lowell or… the list could be endless really.