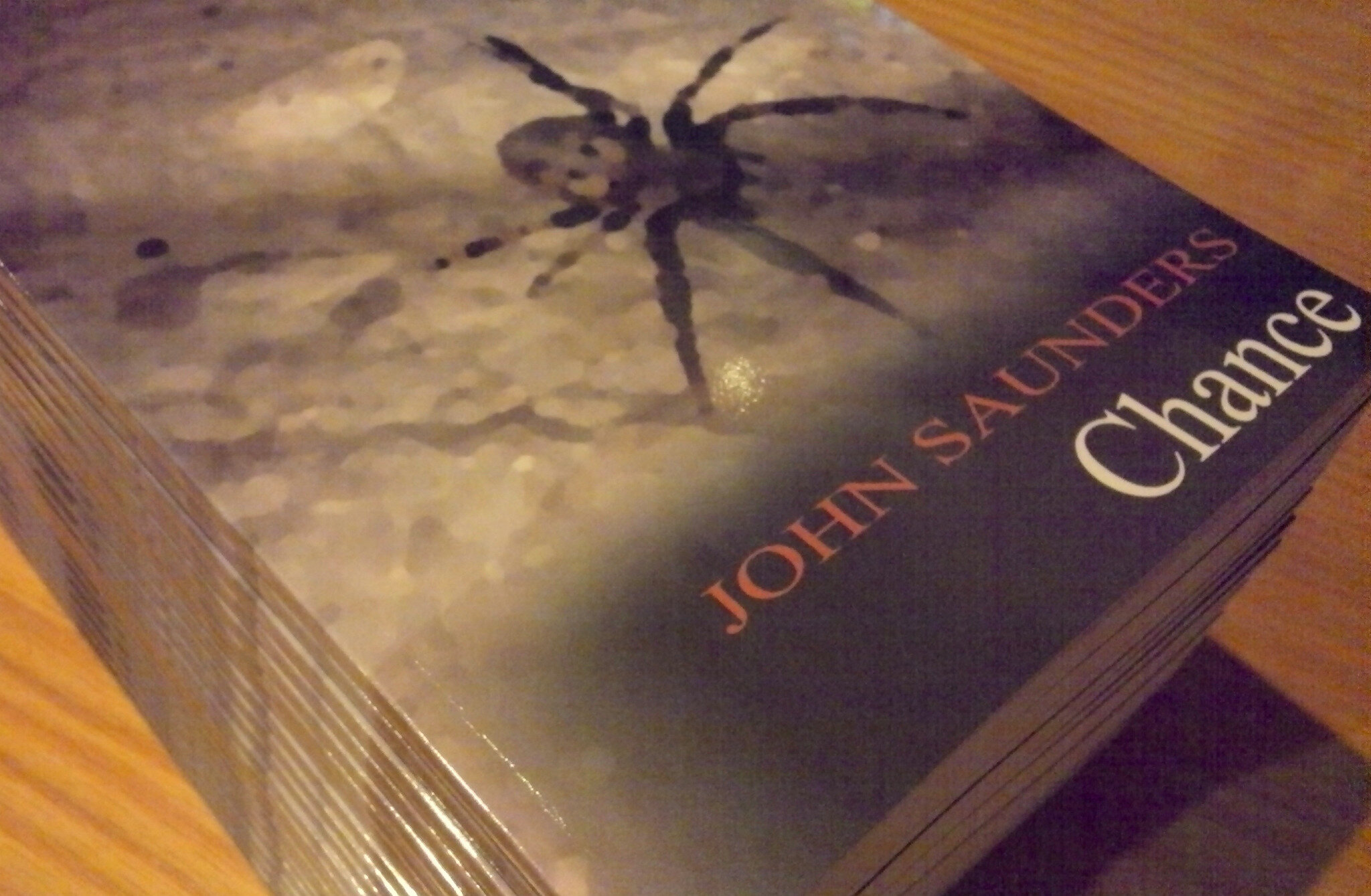 John Saunders has secrets to tell. The Offaly poet’s second collection, Chance, follows 2010’s After the Accident (Lapwing) and it confirms Saunders’ abilities to zoom- in on seemingly innocuous occurrences from memory and from the present day, probing their significance with lyric intensity. It is Saunders’ balancing of strong, formal control with slow- burning, poignant, public utterance to craft poems that recall the chief influences that shine through in these poems; namely Paul Durcan, Billy Colllins and Philip Larkin.

The title poem of Chance, a beautifully achieved Shakespearean sonnet, flows effortlessly- and somewhat ironically- against the central theme of the poem: repression. The poem reaches beyond “that small scullery” that Saunders describes, probing what progress is and what progress isn’t (“…an afterthought to the old run down house, now rubble, / where we sat each evening without doubt”) and explores temporary satisfaction and reluctant acceptance with a formal symmetry befitting of the sonnet form, playing “…the ever present rain / that slapped the window panes” against “our dinners / that when eaten, made us flush / with warmth”.

Saunders’ observational poems may well begin in “that small scullery” and, like the spider depicted on the front cover of Chance, Saunders weaves webs from the scullery to other places of significance for the poet. Remarkably, hotels recur, again and again, which may be linked to Saunders’ role as Director of Shine: the national organisation for supporting those individuals affected by ill mental health. The poet’s take on hotels, however, is multi- dimensional: in ‘Monday Night, Lawlor’s Hotel’, an unflinching eye is set on a regional hotel (“snuffle of beer stained carpet, the meat and two veg / of provincial life overlaid / by Latte and Lavage”). For Saunders, a hotel is an arena for social commentary.

Conversely, ‘In The Victoria Hotel’ is a poem that celebrates intimacy. The classy and elegant ‘Victoria Hotel’ is in sharp contrast to the provincial, “meat and two veg” of ‘Lawlor’s Hotel’. In ‘…Victoria…’, however, physical intimacy fights against moral harmony; the two lovers “…make love in the company of guilt, / shelter weakness in our hearts, / give safety to dangerous thoughts”. Like ‘Chance’, Saunders creates tension between two things that should, in theory, be in harmony, though it is what is not being said- what is not being expressed by the characters that populate his poems- that creates a lyric intensity that rewards upon repeated readings.

Though Saunders focuses his poetic observations indiscriminately, he does, however, fall prey to jaded clichés that he fails to sidestep (consider “our past, present and future / haunted by the shadow of waste, / the deep scar of regret” from ‘Monday Night, Lawlor’s Hotel’). Similarly, in ‘I Listen to Joni Mitchell on My iPod at a Science Lecture’, “mind- blowing” describes the cosmos.

The hard- won and beautifully crafted intimacy of Saunders’ best poems in Chance are compromised by the length of the book (at 68 poems, it is, perhaps, thirty poems longer than it ought to be) and by po- biz name- dropping (there are dedications to Seamus Heaney, Michael Longley, Eleanor Hooker and an acknowledgement to Paul Durcan) that creates a distance between the poet and the reader that sacrifices the raw honesty and moral fortitude that Saunders’ poems achieve.

All of which, of course, is not enough to take away from some marvellous poems. The success of the book’s final poem, ‘Score’, is that it feels as if the entire collection is leading up to what can only be described as the raw, poetic utterance promised from early- on in the collection; the poems that precede ‘Score’ are all holding back the deeper truth that are revealed in ‘Score’, a poem full of the intimate observations that characterise Saunders’ best work.

Originally featured in the print edition editions of The Irish Post on Tuesday  June 18th, 2013.

FOR some time now, Dublin- based Antrim novelist Deirdre Madden has established herself as one of Ireland’s most consistent and skilled living writers. She first broke through in earnest with One By One in the Darkness (Faber, 1996), an unforgettable account of a week in the lives of three sisters during the IRA ceasefire in 1994.

Madden’s ninth and latest effort, Time Present and Time Past, is mostly set in the leafy, middle- class Dublin suburb of Howth during 2006. Fintan Terrence Buckley, a 47-year-old lawyer based in south Dublin, seems to live the comfortable life of the average Dubliner in the affluent days of the Celtic Tiger. After developing an interest in old auto chrome photographs, Fintan begins to experience strange states of altered consciousness and auditory hallucinations, which affect his sense of time and his interest in photography ultimately lends itself to an interest in how he remembers or imagines the past.

Through Buckley’s family- his fashionista sister Martina, daughter Lucy, his macho son, his judgmental brother Niall, mother Joan, his cousin Edward and a cast of many others- we get sense of the hidden histories that some or all of these characters harbor. Madden’s brilliance is in her ability to contrast the surface impressions of her characters with that which is really beneath their skin. This is most memorably executed in the back story of Buckley’s single sister, Martina, and that an indescribably violent act during her days living in London accounts for why she is single; Madden’s gift is in reconciling the past with the present, producing three- dimensional characters.

A central theme that ties the middle- aged, middle- class characters together is the theme of progress and analyzing what accounts for progress: is it better to move forward or move backwards into the past? Through small strokes, Madden sustains this rhetorical question over many pages; one such example being the friendship that Fintan strikes up with Conor, a wounded, desperate bachelor who is a father of one of Lucy’s friends who makes Fintan realize that he has, thankfully, none of the insecurities of Conor.

The most telling example of Madden’s central theme, however, is the episode set in the North of Ireland, where Fintan and Martina discover that their grandparent’s home has been destroyed by their cousin Edward in favor of  a more modern dwelling, which becomes an metaphor for the relationship that Irish people had with their past, their traditions during the Celtic Years and whether pouring concrete everywhere smeared over the cracks of our past.

At 224 pages, Time Present and Time Past- like it’s excellent predecessor, Molly Fox’s Birthday, and One By One in the Darkness- can, like Philip Roth’s later novels, be read in one sitting; in this sense, Madden both remembers and achieves that old adage applied to John Steinbeck’s Of Mice and Men; that it takes two hours to read and twenty years to forget.

Time Present And Time Past is out now.